​You might also want to
visit our other websites

​You can read more about lefthanders on our affiliated websites

The Success and The Failures of Lefthanders in Sports 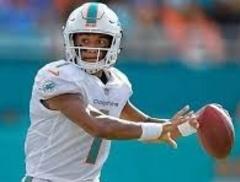 While it is only a small sample, Tua is off to a great start with the Dolphins.

We are looking forward to seeing and sharing what Tua can do in 2022.

We are pleased to welcome Tua Tagovailoa to the National Football League.  The lefthanded quarterback was drafted by the Miami Dolphins with the 5th overall pick on the 2020 NFL Draft, after an outstanding career at University of Alabama.  In college he threw for 7442 yards with a 69.3% completion percentage and 87 touchdowns with only 11 interceptions in three seasons.