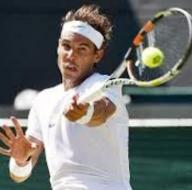 ​Rod Laver and Tony Roche came along and started dominating mens tennis in the early 1960's,
at the time when television helped make the game more popular than ever.

The Best Lefthanders prior to 1960

​​Lefthanders have played a major role in tennis for more than one hundred years.

Why Aren't There More Lefthanded Tennis Players
​Despite the success of all of these great lefthanded tennis players, the overall
number of lefthanders playing competitive tennis is fewer than might be expected.

The Best Lefthanders since 2001