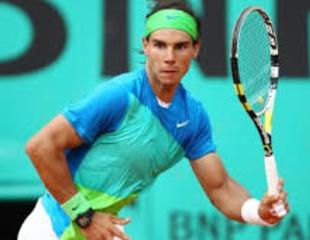 Rafael Nadal is certainly the best lefthanded tennis player of the 21st century, and one of the very best tennis players of all-time.  The native of Spain turned pro in 2001 at the age of 15.  He earned his first tour victory in 2004 and finished the year ranked #51 on the ATP tour.  By the end of April 2005, Nadal had achieved the #7 ranking, and by the end of July he earned the #2 ranking.  His rise in 2005 was fueled by 11 tournament victories, including his first win at the French Open.  He continued to play well and won the French Open again in 2006, and again in 2007.  He held that #2 ranking through August 2008, when he moved up to #1 for the first time.

While his critics claimed that he was only great on Clay Courts, Nadal proved them wrong by winning at Wimbledon in 2008 and the Australian Open in 2009, along with his 4th in a row at the French Open.  The victory at Wimbledon earned him the #1 ranking, which he held for almost a year before falling back to #2.   By June 2010 he was back at #1 thanks to his 1st win at the US Open, his 2nd win at Wimbledon and the 5th win of his career at the French Open.  He held the top spot for almost a year before falling back to #2.  He fell as far as 5th before rising back to the #1 ranking in October 2013 where he remained through July 2014.  Injuries took their toll over the next couple of years, but he never fell any further than the #10 spot.

Overall he has won 19 grand slam tournaments, including one time at the Australian Open, twice at Wimbledon twice, three times at the US Open, and thirteen times in the past sixteen years at the French Open.  Only Roger Federer has more with 20 grand slam tournament wins. Nadal is just 34 years old, and is playing some of the best tennis of his career.  We can expect to see more tour victories, and perhaps some more grand slam victories, in the coming years.  Even though he is righthanded in most other ways except for playing tennis, Rafael Nadal is one of the most dominant lefthanded athletes of our generation.