The best lefthanded quarterback ever

Nick Davila of the Arizona Rattlers

in the Arena Football League. 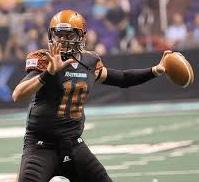 ​Nick Davila ​was a highly touted high school quarterback in California until an injury scared away the major college recruiters.  He recovered and worked his way through junior college to the University of Cincinnati, but was not drafted by the NFL when he graduated.  He had a brief free agent opportunity with the Cleveland Browns, but after being cut in by the Browns during training camp, he sat out the 2007 season.

In 2010, Nick moved on to the Arizona Rattlers and he led the AFL in completion percentage with 67.1 and 102 touchdowns. They finished with a 10-6 regular season record and lost in the first round of the playoffs, but Nick had established himself as a rising star in the league.

In 2011, Nick set a league record for touchdowns and passing yards thrown, and was named league MVP. The Rattlers were 16-2 for the regular season and won the first two rounds of the playoffs, before losing in the final seconds of the Arena Bowl.

In 2012, Nick and the Rattlers finished the regular season at 13-5, and this time they swept through the playoffs and won the Championship.  Nick was the MVP of that final game.

In 2013, Nick led the Rattlers to their 2nd straight title, throwing for six touchdowns as the Rattlers became the first team since the 1995 & 1996 to repeat as back to back Arena bowl Champions.

In 2014, the Rattlers won the championship for the third consecutive time.  Nick won his second Arena Bowl MVP award while throwing for eight touchdowns in their 72-32 victory.

In 2015, Nick lead the Rattlers to their fifth straight division title.  They lost in the second round of the playoffs, missing out on their bid for a fourth straight championship.

In 2016, Davila had another great year, leading the Rattlers to the division championship again, but falling just short in the Arena Bowl Championship game.

After the 2016 season the Rattlers decided to join the Indoor Football League, a league where quarterbacks was expected to run more than an AFL quarterback.  Since running was not Nick’s strong suit, he chose to accept an assistant coaching position, putting an end to his spectacular playing career.

In his seven years with the Rattlers, Davila completed 67.4% of his passes for 32,616 yards with 766 touchdowns and only 91 interceptions.  His team made the playoffs all seven years, made the championship game five times and won the championship three times.  His seven year assault on AFL defenses and the league record book has been perhaps more dominant than any quarterback in the history of professional football.  ​

The Best Lefthanded Quarterback Not In The NFL